The Digital Preservation at Oxford and Cambridge project formally concluded on the 31st of December 2018. It has been a busy and eventful 2.5 years for the six Polonsky Fellows and, although the DPOC project itself is ending, follow-on digital preservation activities are continuing at both organisations as an outcome.

During the course of DPOC the Fellows have collaborated to produce a range of deliverables and recommendations. While it is not an exhaustive list of the Fellows’ work, some of the key outputs from the project were:

Whilst reviewing the work of DPOC, William Kilbride (Executive Director of the DPC www.dpconline.org ) noted that the Fellows have “produced lasting and appreciable benefits” and “delivered a great deal over a relatively short while”. In light of this, the DPC Board has awarded honorary personal membership of the DPC to each of the Fellows.

Both the Bodleian Libraries and Cambridge University Library have been delighted by the exemplary work and contributions of the Fellows, and would like to formally acknowledge the commitment of both teams, namely: Edith Halvarsson, Sarah Mason, and James Mooney (at the Bodleian) and Dave Gerrard, Lee Pretlove, and Somaya Langley (at Cambridge). Their hard work and expertise will benefit current and future generations of readers, researchers, and collection owners.

Digital Preservation is of course an ongoing activity and commitment. It is not only about technologies, but also importantly about the people who maintain them and about organisational culture. The more long-term impact of the DPOC business cases at both organisations are still to be seen over the coming years. To follow these developments and find out more about Bodleian Libraries and CUL’s current digital preservation activities visit the DPOC contact page.

The Digital Preservation at Oxford and Cambridge project ended on the 31st of December 2018. Although follow-on digital preservation projects are continuing at both organisations, the initial DPOC project itself has been wrapped up. This also means that activity on the www.dpoc.ac.uk blog and our Twitter hash (#dp0c) are being wound down.

To give the outputs from the DPOC project a good chance of remaining accessible in the future, we have been planning our ‘project funeral’ over the past few months. Keep on reading to find out how we archived the DPOC project’s research outputs and how you can access it in the future.

This blog has two sections:

Making use of our institutional repositories

The DPOC blog, a WordPress site maintained by Bodleian Libraries’ Systems and Services (BDLSS), has been used to disseminate external project outputs over the past 2.5 years. While the WordPress platform is among the less complex applications for BDLSS to maintain, it is still an application based platform which requires ongoing maintenance which may alter the functionality, look and feel of the DPOC blog over time. It cannot be guaranteed that files uploaded to the blog remain accessible and persistently citable over time. This is a known issue for research websites (even digital preservation ones!). For this reason, any externally facing project outputs have instead been deposited with our institutional repositories ORA (Oxford) and Apollo (Cambridge). The repositories, rather than the DPOC blog, are the natural homes for the project’s outputs.

The deposits to ORA and Apollo range from datasets, reports, abstracts, chapters and posters created by the DPOC Fellows. A full list of externally available outputs is available on our resource page, or by searching for the keyword “DPOC” on ORA and Apollo.

Image Capture: Public data sets, journals, and other research outputs from the DPOC project can be accessed through Apollo and ORA

A full list of Tweets which have used the #dp0c tag between August 2016 and February 2019 can be downloaded by external users from ORA. Due to Twitter’s Terms of Service, only Tweet identifiers are available as part of the public dataset. However, full Tweets generated by the project team have also been retained under embargo for internal staff use only.

As part of wrapping up the DPOC project, the blog will also be amended to reflect that it is no longer actively updated. However, as we want to keep a record of the original look of the site before these edits Bodleian Libraries’ Electronic Manuscripts and Archives are currently crawling the site. To view an archived version of dpoc.ac.uk please visit Bodleian Libraries’ archive.it page.

In October-December both organisations appraised the content which was on the joint DPOC SharePoint site, and moved material of enduring value into local SharePoint instances for each institution. This way the documentation could be made available to other library staff rather than DPOC project members only.

We had largely followed the file naming standards outlined in the communication plan, but work was still required to manually clean up some file names. Additional contextualising descriptions were added to make content more easily understandable by staff who have not previously come across the project. 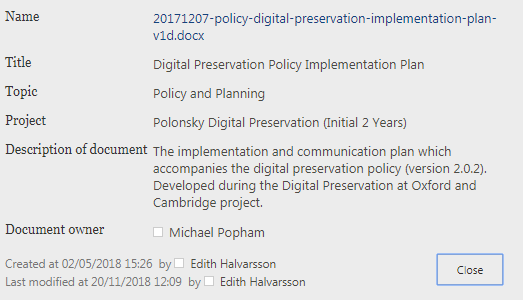 Oxford also used its departmental Confluence page which integrates with the SharePoint instance. Code written during the project is managed in GitLab. 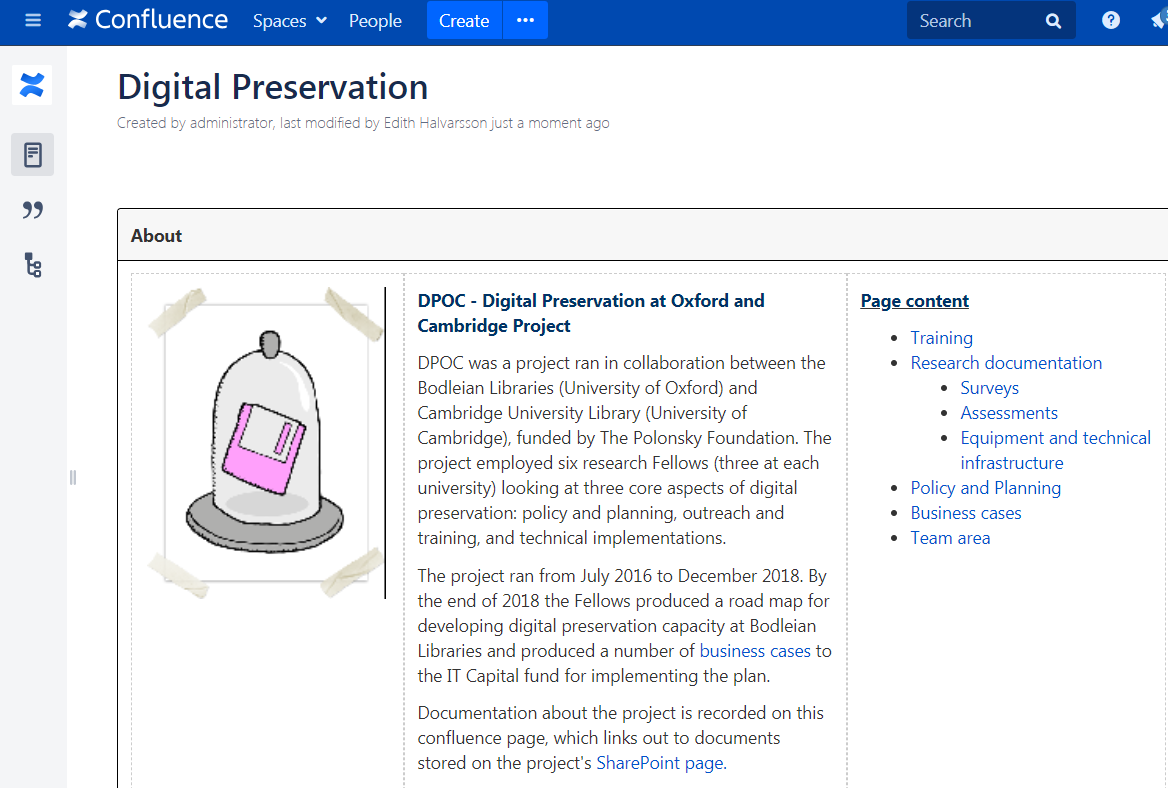 Oxford: Although some of the DPOC Fellows are continuing work on other digital preservation related projects at Bodleian Libraries, ownership of documents, repository datasets and the WordPress website was formalised and assigned to the Head of Digital Collections and Preservation. This role (or the successor of this role) will make curatorial and preservation decisions about any DPOC project outputs managed by Bodleian Libraries.

Cambridge: Preservation activities will continue at CUL following on from the DPOC project in 2019. Questions regarding DPOC datasets and internal documentation hosted at CUL should be addressed to digitialpreservation[AT]lib.cam[DOT]ac.uk