The iPres conference celebrated its fifteenth birthday in 2018. Bodleian Libraries’ Policy and Planning Fellow, Edith, discusses her take on this year’s conference theme.

In 2003 a small international meeting, hosted by the Chinese Academy of Science, prompted the creation of what is today iPres (the International Conference on Digital Preservation). The conference has since grown massively; this year almost 500 delegates attended. To celebrate its fifteenth birthday, iPres 2018 had a self-reflecting theme, considering how the theory of digital preservation has today matured into a community of practice.

In the three years that I’ve worked in the digital preservation field, I have often felt that I have the same conversations on repeat. Which is not to say that I do not love having them! However, the opportunity to reflect on significant developments in digital preservation since 2003 is comforting and shows how these conversations eventually do have lasting impact. Knowing how far the community has come in the past fifteen years opens up my imagination around where digital preservation might be by 2033. And despite current world challenges I am very optimistic!

1) We now have a joint vocabulary

Barbara Sierman, of the Koninklijke Bibliotheek, commented that a development which is particularly striking to her is that digital preservation today has a shared vocabulary. In the early 2000’s even defining the issues around preservation was a barrier when speaking to colleagues. The fact that we now have a shared vocabulary, comments Sierman, means that practitioners are able to present their research and practices at conferences such as iPres.

This is something hugely valuable and does show that digital preservation is emerging as a distinct discipline. Importantly, having established a vocabulary and theories also enables the digital preservation community to challenge and test these very notions and use them as a reference point for new ones.

“The ability to authenticate and validate turns out to be a superpower in an era where data and truth has become a key economic product.”

This was a comment from William Kilbride (Digital Preservation Coalition) on growing interest in the field. I agree that public awareness of digital collecting and digital preservation is something which appears to have changed rapidly in the last year or so. I think there is a growing consciousness that the internet is not permanent and that your digital life has value. My personal observation has been that recent events, (such as Cambridge Analytica as well as the stricter General Data Protection Regulation in the EU), have prompted more people to see their social media and other data as something they can make decisions about. This is for example the first year when friends have started asking me how to extract and preserve their social media! 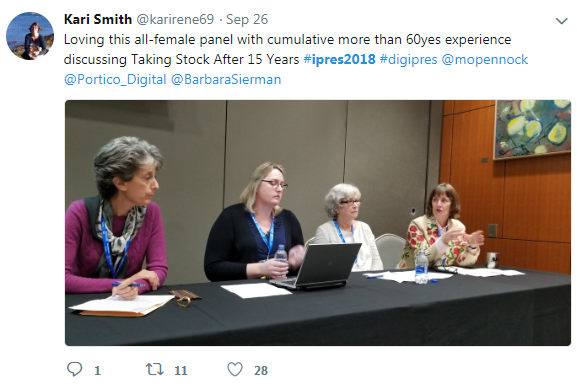 In the panel Taking Stock after 15 Years Maureen Pennock, of the British Library, reflected on the role of research in developing digital preservation as a field. Many of the research projects undertaken in the late 1990’s to 2000’s profoundly shaped the field and without them we would today not have sustainable digital collecting programmes in place in some organisations.

Having the space to undertake innovative research will always be important to ensure that digital preservation can address emerging challenges. It is also highly encouraging that BAU digital preservation programmes are now becoming more common and that organisations are collecting at large and automated scales. However, Pennock warns that there is a difference between research and practice and that the latter needs to function outside the remit of discreet research project funding. This still an ongoing challenge to BAU practices for digital preservation.

And what about the future?

It is always hard to predict which topics are “fads” and which ones make a more lasting impact. However, a hot topic this year (which divided opinions) was whether or not digital preservation should develop into a separate profession with its own code of ethics. The development of digital preservation as a profession could be an important advocacy tool. Conversely, it also runs the risks of isolating digital preservation activities by framing them as something separate from other professions such as archivists, records managers and librarians.

Now that we have the vocabularies, theories, practices, and attention of the media (as outlined above) – should we instead be making a more concerted effort to integrate with library, archives and other research conferences? This will no doubt be a continued area of discussion for iPres 2019 and beyond!