Sarah has recently been testing scenarios to investigate the question of changes in file ‘date created’ and ‘last modified’ metadata. When building training, it’s always best to test out what your advice before giving it and below is the result of Sarah’s research with helpful screenshots.

Before doing some training that involved teaching better recordkeeping habits to staff, I ran some tests to be sure that I was giving the right advice when it came to created and last modified dates. I am often told by people in the field that these dates are always subject to change—but are they really? I knew I would tell staff to put created dates in file names or in document headers in order to retain that valuable information, but could the file maintain the correct embedded date anyways?  I set out to test a number of scenarios on both my Mac OS X laptop and Windows desktop. 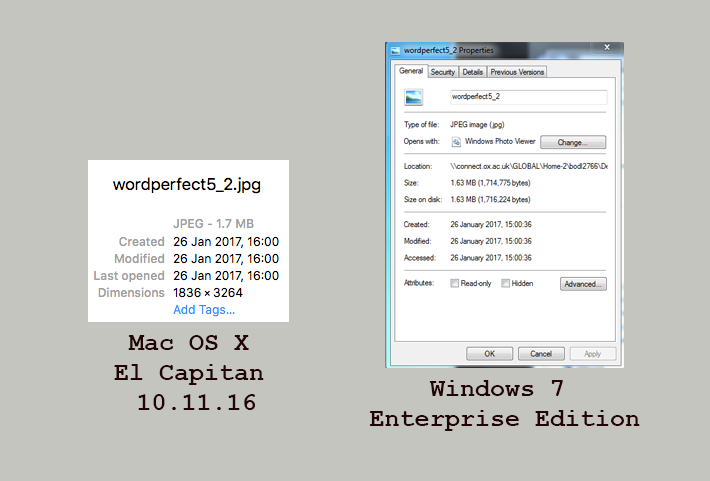 This was an ALL DATES change for both Mac OS X and Windows. 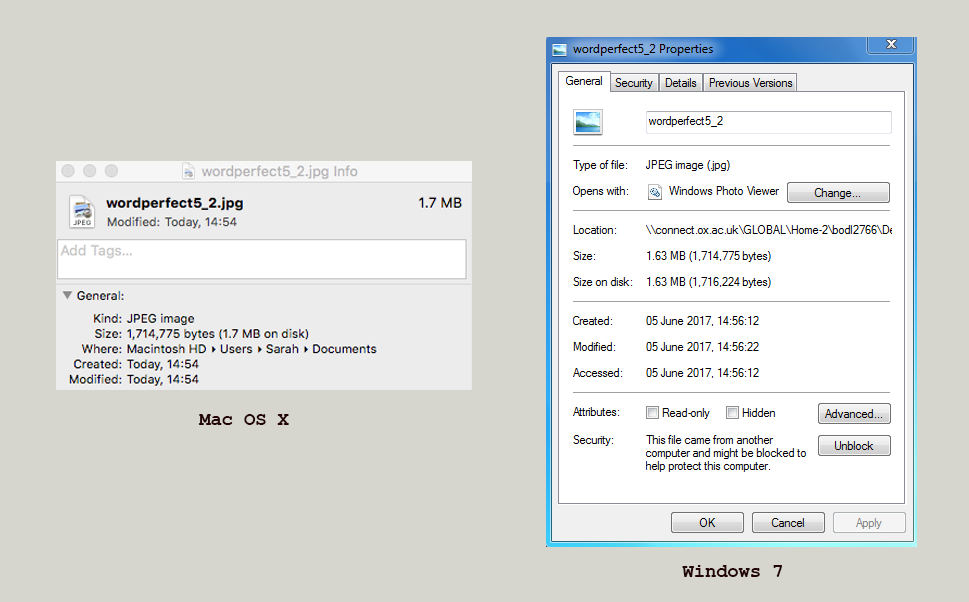 Once again this was an ALL DATES change for both systems. 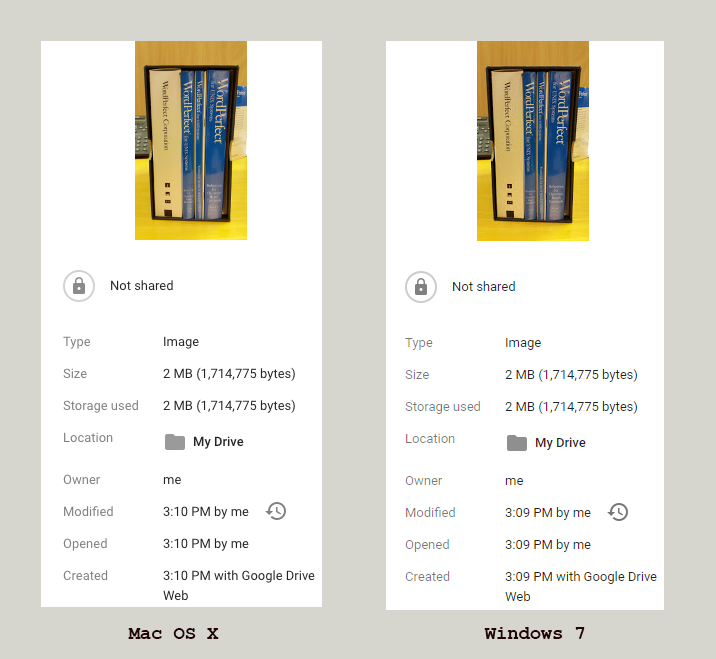 Note: I trialled this a second time with the Google Drive for PC application and in OS X and found that created and last modified dates do not change when the file is uploaded or downloaded the Google Drive folder on the PC. However, when in Google Drive via the website, the created date is different (the date/time of upload), though the ‘file info’ will confirm the date has not changed. Just to complicate things. 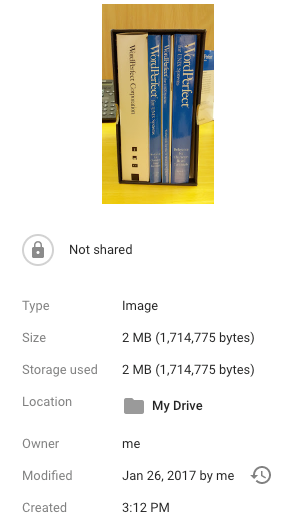 Scenario 3: Transfer from a USB

Mac OS X had no change to the dates. Windows showed an altered created date, but maintained the original last modified date. 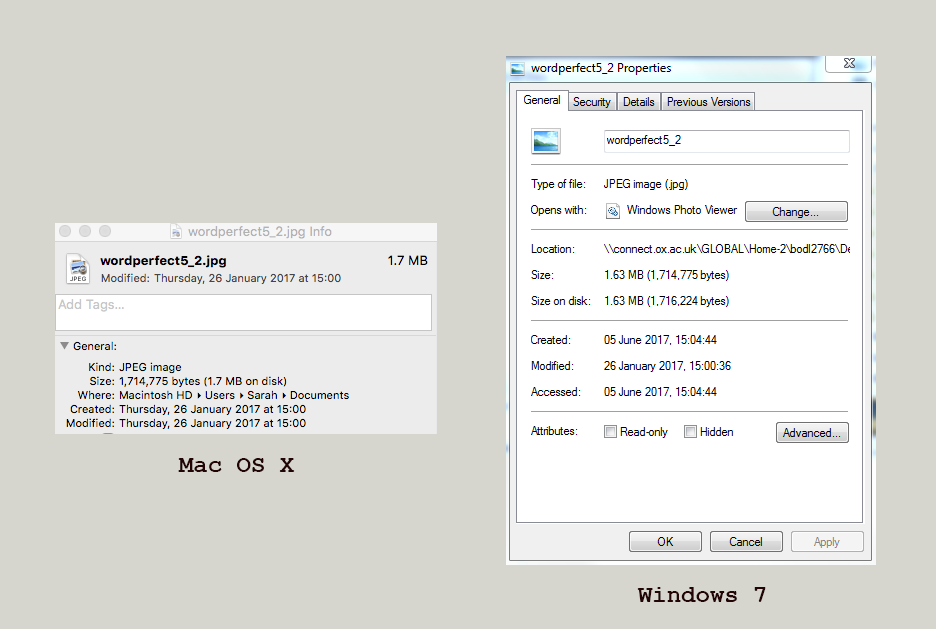 Scenario 4: Transfer to a USB

Once again there was no change of a dates in the Mac OS X. Windows showed an altered created date, but maintained the original last modified date. 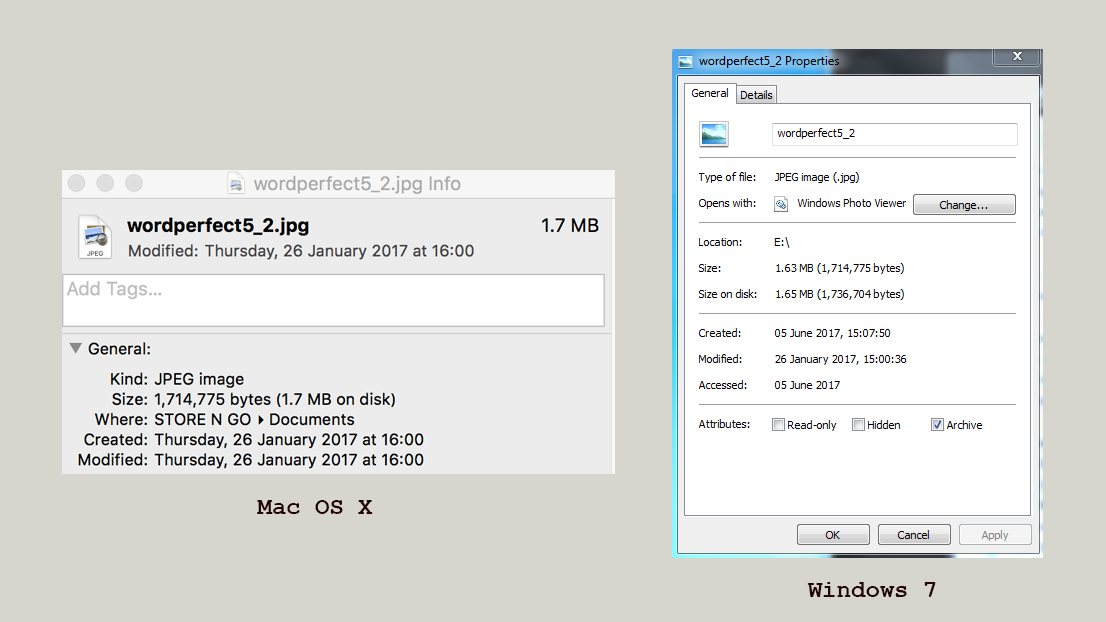 Note: I looked into scenarios 3 and 4 for Windows a bit further and saw that Robocopy is an option as a command prompt that will allow directories to be copied across and maintains those date attributes. I copied a ‘TEST’ folder containing the file from the Windows computer to the USB, and back again. It did what was promised and there were no changes to either dates in the file. It is a bit annoying that an extra step is required (that many people would find technically challenging and therefore avoid). 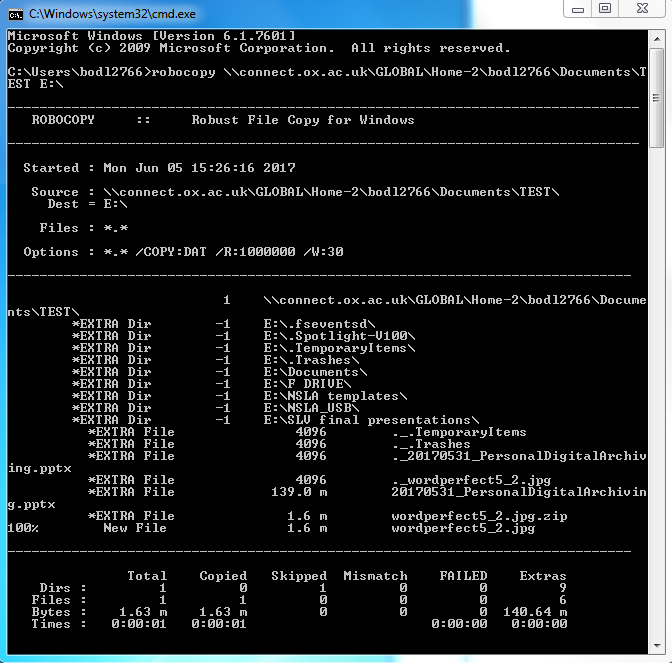 No change across either systems. This was a relief for me considering how often I move files around my directories. 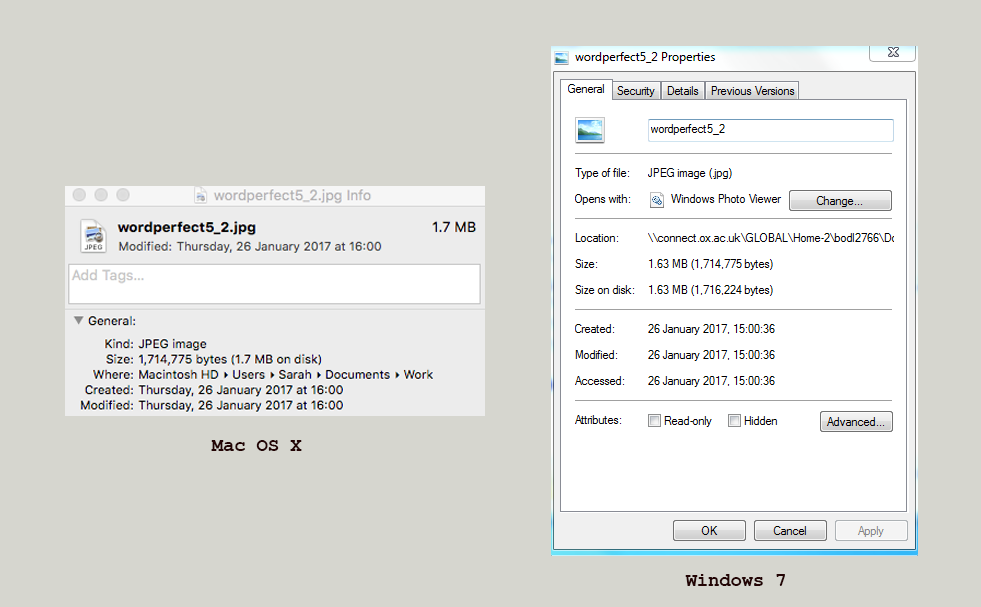 When in doubt (and you should always be in doubt), test the scenario. Even when I tested these scenarios three of four times, it did not always come out with the same result. That alone should make one cautious. I still stick to putting created date in the file name and in the document itself (where possible), but it doesn’t meant I always receive documents that way.

Creating a zip of files/folders before transfer is one method of preserving dates, but I had some weird issues trying to unzip the file in cloud storage that took a few tries before the dates remained preserved. It is also possible to use Quickhash for transferring files unchanged (and it generates a checksum).

I ignored the last accessed date during testing, because it was too easy to accidentally double-click a file and change it (as you can see happened to my Windows 7 test version).

Has anyone tested any other scenarios to assess when file dates are altered? Does anyone have methods for transferring files without causing any change to dates?

12 thoughts on “When was that?: Maintaining or changing ‘created’ and ‘last modified’ dates”